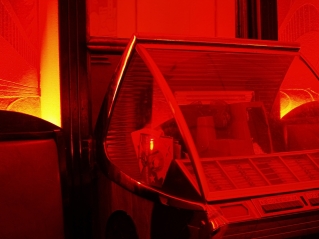 A slow jazz song played on the jukebox. The recording was scratched in places, and the saxophonist played like he had until dawn to finish each note. Harvey’s Joint was thick with smoke and a hipster atmosphere. The lighting skirted on the edge of dim.

Jake swigged his whiskey while mentally making fun of the crowd, knowing full well that this was his scene. A fifties nightclub vibe with the conveniences of an iPhone was what drew him here after work.

The ice melted in his Jack Daniels, taking the sting off, so the drink was somewhat tolerable. Jake didn’t care for stiff drinks of any kind, but the hard stuff was all that was served here which fit his mood just fine. He gestured to the bartender for another double, even though he shouldn’t.

The reality of going home filled him with a thirst for something different, for something besides white wine with a low carb, low sodium dinner.

Looking around, the other barflies were having more fun than he was or at least pretending to. The band he’d come to see was two hours late. Just as he thought about leaving, a pretty face caught Jake’s eye. Light brown hair, full lips, and flawless skin were attached to a body a god would worship. Jake glanced away, lest he be caught staring, but he couldn’t help himself.

He peeked at the beauty over the rim of his glass. A pair of nut brown eyes stared back at him from across the bar.

Everything about this was cliché and unreal. This never happened to him. Ever.

Jake smiled, receiving a coy smirk in return. Nervous energy tingled up and down his spine.

What was he doing? This wasn’t him. He was a man in his forties with a mortgage, high blood pressure, and ten years in at a son-in-law job.

The cutie was way too young – about mid-twenties – and maybe just starting a career, with probably an exuberance and lack of cynicism Jake dearly missed.

He polished off the last of his whiskey in one gulp; his throat burning, but wanting more. The bartender refilled his glass, scooped up Jake’s twenty and wiped down the bar before rushing to fill another order.

Jake looked up again, not because he was interested or anything, he told himself, but just to watch the band set up on stage. That’s all. The cutie was still checking him out; running slender fingers throw a luscious mane when Jake was watching.

Jake licked his lip. He wanted nothing more than to press that tight body on his and kiss that smooth neck. A vision of the cutie bent over the bar, moaning as Jake dove into a tight ass, with his hand holding onto those brown locks sent such a jolt through his groin he almost split his drink.

Jake exhaled a shaky breath. He had to get out of here, fast. If he stayed, he’d walk around the bar. He’d flirt with that cutie, and travel down an expressway he wasn’t sure he wanted to take, but wouldn’t be able to leave once he got on.

Jake swallowed the last of the Jack Daniels. The bartender popped up, asking if he’d like another. Suddenly, the music playing on the jukebox cut off, the lights lowered, and a spotlight shone on a young guy wearing a full beard, long hair and a white 1950’s style suit strolling on stage to announce the band.

Jake waved away the bartender, slipped off his bar stool and gathered his black leather jacket that he’d bought in a fit of boredom online when he was supposed to be analyzing the ROI on a client’s marketing campaign. He fussed with the zipper and patted around for his keys, knowing exactly where they were, but not able to move his feet.

Goosebumps rose on the back of his neck. He felt those sexy, brown eyes on his skin. Don’t turn around, he warned himself over and over. Damned if he could help it. Those lips were so pink, so soft. He pictured them wrapped around his cock and his hand caressing that stunning face.

Jake shuddered, his balls tightened. Breathing hard, he rubbed the gold band strangling his finger. His conscious screamed for him to walk outside, hail an Uber, go home. Return to the life he’d fought to build. Marriage. Family. Equality. A hard battle won through tears, through prejudice, through hate. Home was where he belonged.

But. But…it wasn’t where he wanted to be. Jake placed one foot in front of the other, stepping tentatively to the door. His hand touched the cool brass handle, shaking. Damned if he could help looking back one last time.

The brown-eyed Adonis had moved on, winking at another man with a stiff drink in his hand. They smiled knowingly at each other of events yet to come.

Jake pushed the handle and let the door slam behind him. He deeply inhaled the balmy night air that was free of the haze of cigarette smoke. Emptiness sat like a brick in his gut. In his heart he knew, he couldn’t do this anymore.

Jake ripped off his tie, then he shrugged off his jacket, slamming it onto the pavement. Coins jingled on concrete. He wanted to scream, and his face burned with a heat that could have set his hair on fire. He looked around for something to throw.

“Thanks, um… thank you,” Jake stammered, taking his keys from a rough, calloused hand.

“You going in? I heard the band is pretty great.” Mr. Blue Eyes rested his hand on the door handle; his stare gliding the length of Jake’s body.

Jake felt a blush rise up his cheeks to his ears. Was he going back in? Was he going home? Either way, he was on a path that he couldn’t turn away from.

I hope you liked this week’s flash fiction post.

4 thoughts on “#FlashFictionFriday – Just a Drink by Stacy Benedict”