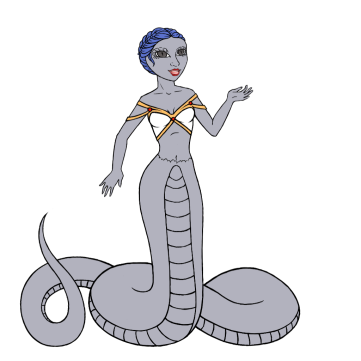 According to Greek mythology, Ekhidna (Echidna) was born of the sea goddess Ceto (Keto) and her brother Phorcys (Phorkys), a sea god. Mythology paints her as an immortal and ageless beauty, at least from the waist up. Her lower half was a serpent tail. Ekhidna’s talents included hiding in caves and eating rude people who wandered into them.

Ekhidna’s fame comes from the children she sired with her lover Typhoeus (Typhon). The ancient world was a sexist time. Their brood of beasts terrorized Greeks in story.

First she had Orthus (Orthos or Orthrus).  He was a two headed dog that guarded Geryon the Giant’s cattle with his master Eurytion, the son of the war god Ares.

Next she bore another bundle of fluffy canine joy, Cerberus (Kerberos). He was the personal pet of Hades, the ruler of the dead, and the official guard dog of the underworld.  In most descriptions, Cerberus had three heads, multiple snakes on his back and a snake head tail.

Little sisters the Chimera and the Sphinx had adventures of their own.  The Chimera had three heads, one of a lion, the body and head of a goat and a snake tail with its own head. Imagine the dinner conversations they must have had.  She also breathed fire, taking after her dear father.

The Sphinx had a beautiful upper body, like mom, with an unfortunate lower body of a lion, wings of a giant bird and a taste for human flesh.

The Hydra of Lerna was a multi-headed serpent with amazing healing abilities.  Cut off one of its heads and another or more grew to replace it. This was a fortunate skill during this time of vengeful gods, thugs on “labors” and the lack of penicillin.

Phaea (Phaia) the Crommyonian Sow was not as well-known as her brothers and sisters.  She was named after her owner. They lived in the small town of Crommyon, but were not well liked by their neighbors. Phaea was the mother of the Boar of Calydon.

Last but not least of Ekhidna and Typhoeus’ happy family was the Dragon (Ladon).  He followed in his brothers’ footsteps with a career in security. He guarded the Golden Apples in the Garden of Hesperides.

Another mythological monster some scholars consider a child of Ekhidna, but not necessarily with Typhoeus, is the Caucasian Eagle. The Eagle was best known for his love of iron rich foods like liver. The liver just so happened to belong to Prometheus.

Many mythological stories ended in tragedy. Ekhidna’s was no different. She was murdered while she slept by the coward, Argus Panoptes (Argos Panoptes).

Argus was a giant with a hundred beady eyes. He worked as the goddess Hera’s goon. At Hera’s behest, he guarded the nymph Io (who was in heifer form) from Zeus. Righteously, the god Hermes killed Argus and liberated Io.

Justice came full circle for Ekhidna. She was a great beauty, goddess, mother and people eater.

Hope you liked this week’s post and my take on Greek myth. You can read last week’s blog to learn more about me.

Please let me know what you think.

Next week’s blog will feature Typhoeus (Typhon), a god interrupted.

3 thoughts on “Greek Mythology: Ekhidna (Echidna) – The Mother of Monsters”